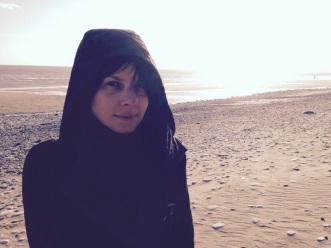 How did poetry first appear in your life?
Prayers, hymns. I suppose we did some poetry at school. We did have to memorise the prologue from Romeo and Juliet for an English lesson, maybe second or third year. And even though I’d gone to the trouble of learning it, I pretended to need the copy my friend was surreptitiously holding for me under the desk. It was not subtle. I messed it up. But I do still have it memorised. Also, I was once in love with a boy called Byron.

Has a poem ever changed your life?
At an audition for a City Hall production of The King and I, back in the day, I was to recite “a brief poem”. After listening to my peers quoting / misquoting (how would I have known?) a lot of serious and long works of the canon (probably), I went with “The sausage is a cunning bird”. I think out of sheer relief on the part of the judges, I got in.

What is your favoured form of writing avoidance?
Romcoms. My heart beats for When Harry Met Sally. I’ve seen it a shocking number of times, think Billy Crystal spitting the grape seed out the rolled-up window, on the road trip from Chicago to New York, is funnier than the very funny fake orgasm scene. I love Harry’s “dark side”, and Sally’s wide-eyed face when she tells him why they don’t make Sunday underpants … “because of God”.

On that road trip, Sally argues that Ingrid Bergman wants to get on the plane at the end of Casablanca, rather than stay with Rick, because “women are very practical”. However many years later, she and Harry catch the end of the film on Channel Eleven, and he says:

“Now you’re telling me you’d be happier with Victor Laszlo than with Humphrey Bogart?”
She says, “… I never said that. I would never have said that”.

That mind change, that he remembers, that she doesn’t … it’s an amazing piece of characterisation that just seems thrown in, like basil. Nora Ephron, Meg Ryan, Carrie Fisher, gorgeous, clever women.

What’s a good poem idea that you’ve had but never managed to write?
But if I tell you the idea, I’ll never write it. I still have time!

Have you ever learned a poem by heart, and which one was it? Can you still remember it?
“Morning Song.” “Love set you going like a fat gold watch.” I have an image of the watch, in all its fat nakedness dangling by its ankle as the midwife slaps the crap out of its cogs. I’ve memorised it at least three times, which means I’ve forgotten it again twice. After a while the words start to fade. Is it a watch or a clock? Is it a Victorian nightgown or nightdress? What I’m left with is the opening line, more or less, moth-breath, a floral cow? and balloons rising into a night sky.

I have a few others by heart. The fourth poem in Heaney’s “Clearances”. Bishop’s “Insomnia”, for when I can’t sleep. “Pied Beauty”. I memorised “No Man is an Island” along with (not quite) half the country, in a sort of prayer against Brexit. “If a clod be washed away by the sea …”

Angelina D’Roza and Pete Green lead Vanishing Point, a poetry walk through central Sheffield, on Sunday 28 May (11am start at Lady’s Bridge). Click here for more details of the event (advance booking essential).