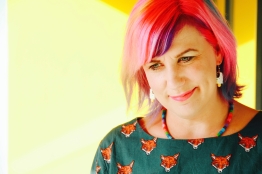 Someone says ‘you should write a poem about that’. What do you do / say?
Nod and smile just like when they tell me a joke and say “You can have that” or when I say I’m doing a PhD and they talk about a pet subject and then say “You should research that”.

What do you think poetry’s relationship to politics should be?
It depends on the poet and the politics. Many poems that don’t look political are – particularly by women. I’m interested in that.

Has a poem ever changed your life?
I took far too much notice of Leonard Cohen’s “True Love Leaves No Traces” in overheated letters to early boyfriends.

Describe your ideal poetry festival line-up…
Leonard Cohen comes back from the dead and headlines.
There are lots of funny poets – from Murray Lachlan Young, Matt Harvey and Elvis McGonagall to John Hegley, Scott Tyrrell, Pam Ayres and Wendy Cope – interspersed seamlessly with poets who are less overt users of humour. Perhaps Selima Hill, Tony Hoagland, Sharon Olds, Angela Readman. Ted Hughes and Sylvia Plath come back from the dead to do a joint reading and debate about feminism. Poets curate their own themed nights with debates; Tim Wells, Jo Bell and Bill Herbert would do a good curatorial job. There’d be a special Northern Poets versus Southern Poets face-off. It would be amazing…

Do you have any bad poetry habits?
I use rhyme
all the time
and I’m not sure I’ve really got the hang of line breaks.

What is your favoured form of writing avoidance?
Vacuuming, afternoon tea, Twitter.

If you could bring a dead poet back to life and ask them one question, who would it be and what would you ask them?
Leonard Cohen – what do we do about Trump?

How do you feel about making a living from poetry? Do you do it? Do you avoid it? Do you want to do it?
I’m a proud jobbing poet. I sometimes miss it being a hobby, but I work at my craft and am proud to be professional and to have managed to make a living since 2006.

What’s a good poem idea that you’ve had but never managed to write?
I write my good poem ideas – but I have a good novel idea every week or so that I don’t write.

You write a poem that you’re really pleased with, but it will offend someone you know: what do you do?
Sod ‘em. Nowadays. Also, use humour so they don’t know they’re offended.

Have you ever learned a poem by heart, and which one was it? Can you still remember it?
I memorise lots of my own poems- but I memorised a lot of TS Eliot’s Cats for no apparent reason when I was a teenager. Vague lines still swirl: “Rejoicing in his title of the Terror of the Thames”…

Tell us something about putting together your most recent collection, or what you’re working on now.
I’ve just finished putting together my newest collection Chronotopia for Burning Eye Books. It rescues some topical poems such as my Glastonbury Festival residency poems and puts them in one place. A chronotope is a fusion of time and place – I’m really interested in how Northernness is often used to mean a past Northernness and want to try highlight and resist that in my poems going forward.