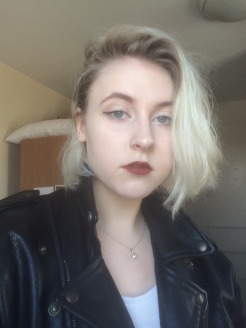 How did poetry first appear in your life?
First it appeared as a trapdoor, then as a girl in a red skirt and now I think it’s a spectral presence sitting nefariously on my left shoulder.

What do you think poetry’s relationship to politics should be?
There’s an Audre Lorde essay called ‘Poetry is not a Luxury’ where she says that ‘as they become known and accepted to ourselves, our feelings, and the honest exploration of them, become sanctuaries and fortresses and spawning grounds for the most radical and daring of ideas.’ Basically, poetry should work alongside direct action.

What is your favoured form of writing avoidance?
Writing emotional tweets then deleting them.

If your favourite poem were a meal, what would it be?
It would be something enjoyable but bittersweet and bit gross like chips on the night bus after you’ve been out dancing but also cried a bit because you love your friends too much.

What’s a good poem idea that you’ve had but never managed to write?
Oh god, so many. I’ve been trying to write poems about female murderers for about a year and they’re all stuck in the draft stage. I like to have these ideas and projects floating around in case I get bored with whatever else I’m working on.

Have you ever learned a poem by heart, and which one was it? Can you still remember it?
I learned a Glyn Maxwell sonnet called ‘The Ages’ mostly by accident because I read it a lot and I can still recite the whole thing.

Tell us something about putting together your most recent collection, or what you’re working on now.
I’ve had so much fun putting together my pamphlet and I can’t wait for people to see it, it’s very exciting to see all that work in a neat small package. Right now I’m working on a poetry performance in response to Anne Carson’s translations of Sappho.