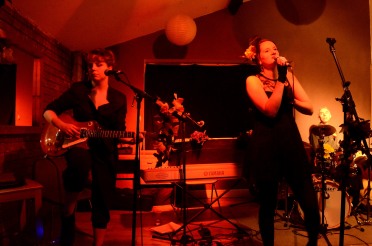 You’ve heard of Kurt Cobain. You’ve heard of Jim Morrison. But have you heard of Scott Johnson, or Lina Prokofiev? The Unsung is a funeral party for the forgotten heroes of musical history – not the famous dead rock stars, but the people whose story has never been told. A journey in poetry and sound from Sheffield poet Genevieve Carver and her live band Sarah Sharp, Tim Knowles and Brian Bestall, The Unsung takes you on a whirlwind tour around the world exploring how music has shattered the lives of those who’ve loved it most.

Genevieve Carver is a Sheffield-based poet interested in finding the humanity amidst the chaos. She began to enchant audiences in 2011 with her trademark mix of humour and melancholy, and now performs regularly at prestigious events across the country, having supported artists such as Buddy Wakefield and Hollie McNish. Her written work has appeared in several national anthologies and magazines including Iota, Envoi and The North. She has been awarded various literary prizes, including highly commended in the Troubadour Prize and reaching the long-list of the National Poetry Competition. In 2016 she was a semi-finalist in the Hammer & Tongue UK National Poetry Slam.

“Gevi Carver is one of the leading stars of the northern spoken word scene, often amusing and heartbreaking in the same sentence, she is always entertaining and one of South Yorkshire’s best performers” – Now Then Magazine.

The Unsung was researched and developed as a residency project at Bank Street Arts, using a Grant for the Arts from Arts Council England between March and December 2016. Much of the material was written during a week-long residency at Sheffield Theatres as part of Making Room. Watch the trailer for The Unsung: